Not a substitute for professional veterinary help. Learn more,

When you purchase through links on our site, as an Amazon and Chewy Associate I earn from qualifying purchases. Learn more.

Contents hide
Why Do Dogs Chase Their Tails?
Reasons why Dogs chase their tails
1- Attention-seeking behavior
2- Joyful reaction to the success
3- Refreshing self-touch
4- Compulsive behavior
Other reasons behind chasing their tails
What can be done to stop this behavior?
Tips for stopping your dog from chasing its tail
1- Put down the treats and toys
2- Take things in stride
3- Praise your dog
4- Use a muzzle if necessary
5- Use a Halti collar for training
6- Work with a dog behaviorist
Conclusion

Dogs mostly amuse us with their adorable antics, and one of them chasing their tail. Have you ever wondered why do they do this?

Well, there are several reasons that justify why dogs chase their tail. The most prevalent theory is that the behavior is caused by a desire for attention and greeted with joy when the dog succeeds in getting it or there could be any medical condition.

This blog post discusses why dogs do that and what can be done to stop this behavior.

Why Do Dogs Chase Their Tails?

Dogs chase their tail to gain the attention of their owner or caretaker. The tail is an indicator of the dog’s health and well-being. So it is clear that the dog has a good time when one is chasing it.

This attention-seeking behavior is triggered by the bond between a dog and its owner. It is not uncommon for a dog to get into chasing its tail, especially when it is exciting.  This is a harmless, natural behavior, and most dogs find it amusing too when they are the ones getting chased!

Reasons why Dogs chase their tails

Here are a few of the reasons why dogs chase their tails:

Dogs chase their tail for one main reason: attention. When a dog growls, barks, or lunges at its tail, the owner is usually quick to respond by petting the dog. This is why a dog will often chase its tail: to draw its attention.

2- Joyful reaction to the success

Many dogs run around with their tails in the air, wagging them exaggeratedly. Humans often interpret this as a sign of distress or nervousness, but it is a positive reaction to success.

When a dog chases its tail and gets it, the owner will respond by petting the dog more often than not. This attention and petting are what the dog is aimed for, so when it gets it, it gets excited and wags its tail in joy.

Self-touch is a common practice among animals, including humans. It is usually done to reduce stress and increase well-being, but it can also act as a distraction from activities in the environment in dogs.

Dogs often do self-touch when chasing their tails for several reasons. They may rub their faces on objects, wag their tails in the air and even roll in dirt or snow. All of these behaviors are calming and help the dog to refocus.

Sometimes, a dog will begin chasing its tail due to fear or aversion to its tail. Dogs with longer hair can often get their tails caught, which is extremely uncomfortable. In such cases, the panicked dog may bite its tail and cause it to bleed. This distress may lead to a phobia of the tail. If you notice such behavior in your pup, you should seek vet help right away.

Other reasons behind chasing their tails

Besides the reasons discussed above, there are a few reasons dogs chase their tails. Territoriality is often marking its territory A dog that chases its tail often marks its territory. This happens when a dog pees in the same place.

Another reason is anxiety, usually accompanied by another issue, such as boredom. If your dog is getting anxiety from something, there may be a solution such as exposure therapy, a proven method for treating anxiety in dogs.

What can be done to stop this behavior?

With time, you can pare back on the collar’s use and instead use your hand or a toy to stop your dog from chasing its tail. This will stop the behavior and teach your dog to respect your boundaries.

If your dog is a tail-chasing machine, the best thing you can do is to take things in stride.

Tips for stopping your dog from chasing its tail

Below are the few things you can do to help your dog stop chasing its tail:

1- Put down the treats and toys

When your dog chases its tail, and you respond by throwing a toy or offering a treat, your dog will associate this with the chase, and the reward will be diminished. It is best to ignore your dog the next time it starts to chase its tail.

If you have allowed your dog to get used to being chased by you, you can start taking things in stride. You will not respond to the behavior by chasing your dog and offering a reward. Instead, you will distract your dog with something else.

Praising your dog when it stops chasing its tail can also help to reinforce the behavior. This will let your dog know that it is doing the right thing, and it will soon learn to associate the behavior with a reward.

4- Use a muzzle if necessary

If you have to wear a muzzle in public, your dog may associate it with not getting to chase its tail. In this case, you may need to start taking things in stride, distracting your dog with a treat or toy instead.

5- Use a Halti collar for training

A Halti collar is a great tool to use for training, which can stop your dog from chasing its tail. It has three adjustable straps that act as a humane restraint. So, your dog cannot turn its head and maims its neck while you step in and stop the behavior.

6- Work with a dog behaviorist

If none of these solutions work, consider consulting a professional behaviorist. There may be underlying issues causing your dog anxiety, such as fear or aggression towards other dogs, which can be fixed with a specialized training program.

Dogs chasing their tail can be pretty amusing, but it is important to remember that it is an activity that requires a lot of energy and can tire your dog out. If your dog is getting into a habit of this behavior, it may be good to take things in stride and divert its attention with a treat or toy instead.

If you’re thinking about a rewarding activity for your dog, you should get safe dog toys and treats that won’t harm your dog.

Thank you very much for visiting this site! Did you find this article helpful, or have any questions? Please feel free to comment below; we will get back to you shortly.
Two Dog Zoo Team

Medical Disclaimer: The contents of the Two Dog Zoo website, such as text, graphics, images, and other material contained on this site (“Content”) are for informational purposes only. The Content is not intended to be a substitute for professional veterinarian advice, diagnosis, or treatment. Always seek the advice of your veterinarian with any questions you may have regarding the medical condition of your pet. Never disregard professional advice or delay in seeking it because of something you have read on this website!

Two Dog Zoo is supported by its audience. When you purchase through links on our site, as an Amazon and Chewy Associate I earn from qualifying purchases. Learn more. 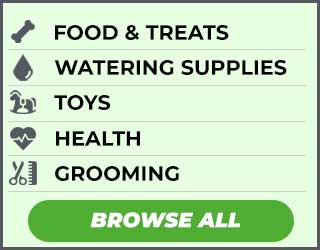